Seafarer Training UK offers the full range of RYA courses, including the most popular Competent Crew and Day Skipper courses as well as more advanced training from Coastal Skipper to Yachtmaster Offshore level.

Our training centre gives the opportunity for tidal practice weekends as well as mile building trips to the west country, Channel Islands and France. For those who are nervous, or looking for a refresher before their upcoming holiday, our bespoke weekend courses are ideal to brush off the cobwebs and get back into the swing of things.

The Solent, in our view, represents the ideal starting point, thanks to good accessibility from many parts of the country. It’s protected waters enable sailing in most conditions plus a great range of destinations to sail to, from the Isle of Wight to attractive harbours like Poole and Weymouth to the West, or Chichester and Portsmouth harbour to the East. Many of our training trips are across the channel to France and the Channel Islands.

New for Autumn 2021, we are also offering courses from Plymouth, offering another cruising ground to explore. Depending on the length of the course, we like to visit Fowey and Falmouth to the west of Plymouth, and Salcombe and Dartmouth to the east.

*Based on 2 people sharing a cabin

Cruising Scheme Logbook G158 – Whilst we try to have these available for purchase in resort, we recommend that you purchase these prior to your course. You can purchase these from the RYA online shop.
Competent Crew Skills CCPCN – For those taking the Competent Crew Course
Day Skipper Practical Course Notes – For those taking the Day Skipper Practical Course

Shamrock Quay, our home marina, is an ideal spot from which to start your trip.

Get into the sailing spirit with a visit to Cowes, one of the premier yachting centres of the world, home to the famous Round the Island Race and Cowes Week. It has a variety of marinas on the River Medina, one with a lock for adventurous sailors with enough water under their keel. A large number of pubs, restaurants and bars keep visitors fed and watered along the bustling High Street.

Almost opposite Cowes, the Beaulieu River and the picturesque 18th century shipbuilding village of Buckler's Hard occupy a superb location at the edge of the New Forest. Wooden ships for the English fleet of Henry VIII were built here and the village retains much of the atmosphere of its shipbuilding origins. An attractive marina with modern facilities welcomes visiting yachtsmen.The challenging entrance channel is a test for budding day skippers.

Officially an area of outstanding natural beauty with 17 miles of well marked and lit channels which, with its easy access to the Solent, makes it an ideal water recreation centre.Two thousand berths in four marinas and 14 sailing clubs ensure this is a jewel for visiting sailors.

This picture postcard village with cobbled streets down to the banks of the River Hamble is at the heart of the sheltered waters of the Solent, protected from the open sea by the Isle of Wight. There are more than 3,000 river moorings, with berthing available at several marinas, boatyards and on harbour authority pontoons.

A picturesque fishing, ferry and yachting port at the mouth of the River Yar and known as one of the jewels of the south coast. The deepwater harbour retains its old world aura while visiting yachtsmen will find a range of up-to-date amenities. It's often busy especially at weekends, so boathandling skills are put to the test as boats jostle for a berth. Yarmouth Town has a number of hostelries, cafes and restaurants for inner refreshment.

This bustling market town boasts a wide variety of shops from picturesque boutiques on the cobbled quay to larger supermarkets. The Georgian and Victorian architecture and the varied and colourful history help to create a distinctive quaintness.

One of the busiest harbours in the UK and a test for any yachtsman's sailing and navigation skills. Several marinas are located on the port hand side of the busy Naval and commercial port, opposite HMS Victory and the Mary Rose, both accessible using the Gosport ferry.

Bembridge Harbour is located at the east end of the Isle of Wight offering visitor berths at the newly-refubished Duver marina.It is a large, natural and well sheltered picturesque harbour and serves as a useful departure port to leave for the continent.

On arriving at our base, you will be greeted by your instructor and shown to your yacht. There you will be given an essential safety brief and then free to relax for the night or mix with other guests. Our courses start on the following morning and run for 2, 5 or 7 days until mid-afternoon on the final day.

Full board is included (apart from the first night if joining the evening before your course starts) giving you the time to focus on learning and having fun. Sailing is a social sport, and an RYA sailing course can be a perfect way to make new friends. Our RYA instructors have been chosen for their friendly approach as well as their expertise. The time you spend with us is as much about fun as it is a learning experience.

Embarking Friday evening from 6pm or by 8:30Am Saturday morning our weekend tuition includes refresher courses, tidal conversions, taster cruises and the RYA Start Yachting. We will tend to sail locally, visiting the Isle of Wight, and the pretty harbours and towns within the Solent. Disembarkation is typically by around 4pm on Sunday afternoon.

Our 5-day sailing courses venture further afield with cross-channel or coastal voyages to locations such as Weymouth and Poole. These include refresher courses, mile builder voyages as well as ICC courses and the standard RYA practical courses.

Ideal for groups or for those who wish to ensure a bespoke program fully tailored to your needs. Depending on your previous experience, you can undertake any RYA courses or concentrate on any area identified as your training needs.

Price will depend on the time of year and the numbers in your group – please give us a call and we will be happy to put the right package together for you and your party. 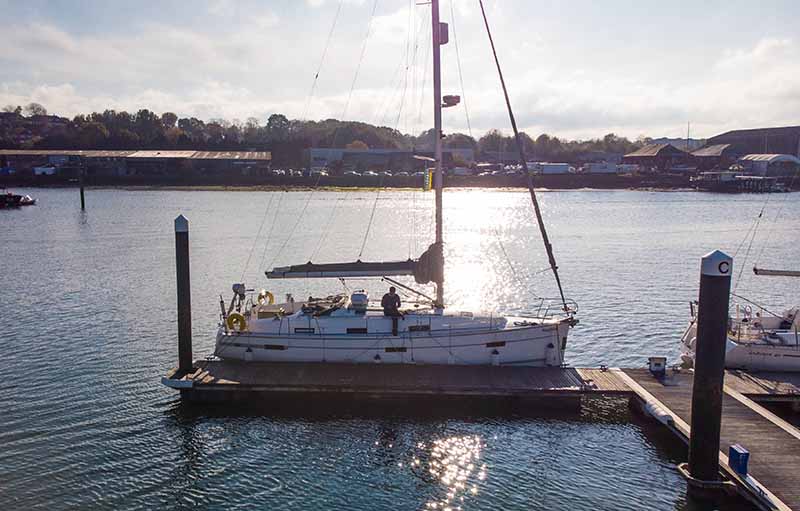 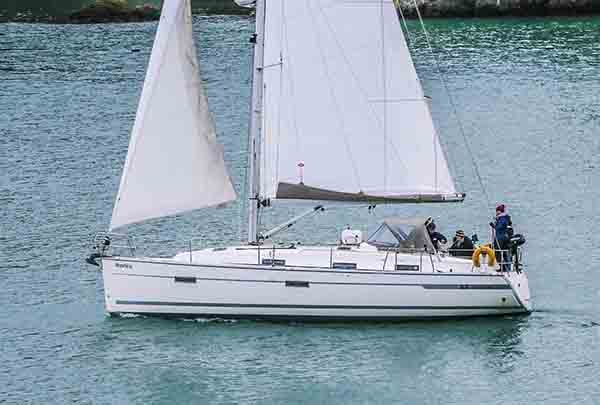 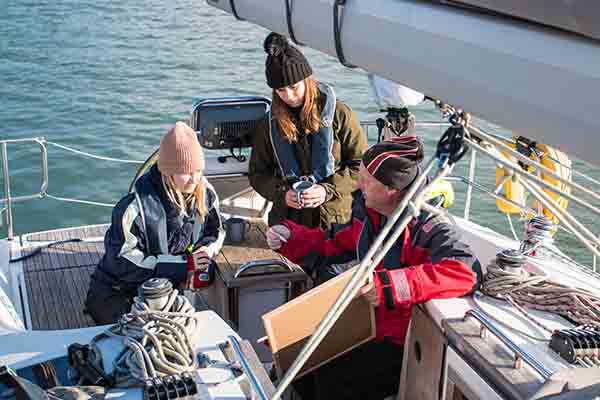 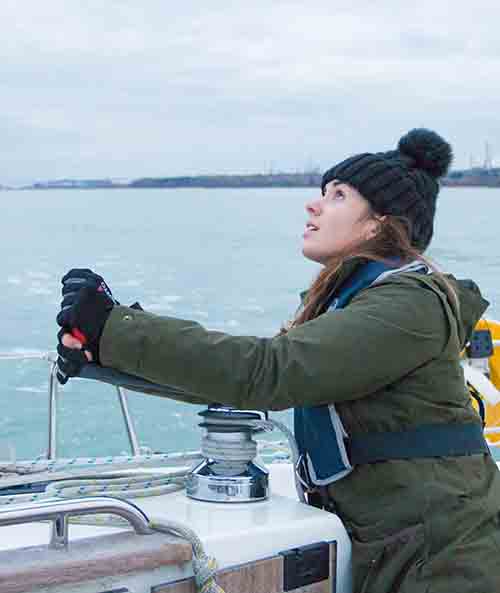 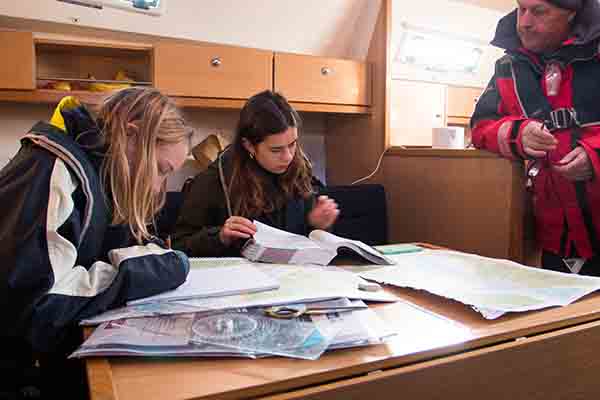 Free parking is available at our base if you are driving, or it is a relatively short cab ride from either Southampton  station or the airport.

Parking is secure in the berth-holders and visitors area which is on the right hand side as you enter the marina (opposite Force 4 chandlery).

Our fully coded RYA Training Yacht on the south coast is a Bavaria 39 “Pandora”. With 3 double cabins (one en-suite) this is a popular sized charter yacht. Perfect for learning if you intend to charter in the Mediterranean.

With modern navigation equipment and home comforts. As well as all the safety equipment required to make your course safe, secure and relaxing.

We Will Not Be Beaten On Price !

As an independent company, we are able to keep our prices highly competitive – if you see a like for like product featured elsewhere cheaper, let us know and we will beat it!
This guarantee applies to yacht and accommodation rates on our Beach Club, Flotilla, Learn to Sail and & Cabin Charter programmes operated by Seafarer and is subject to availability at the time of booking.