History of the Ionian Islands 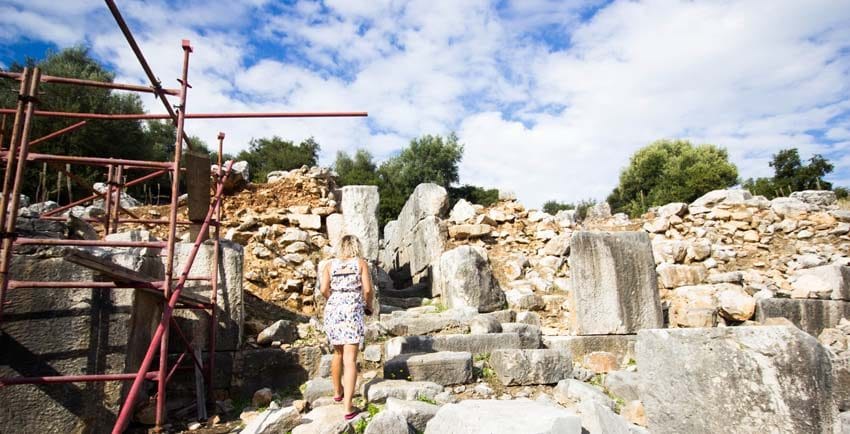 While the history of the Ionian Islands is not as well documented or maybe as glamorous as that of Athens, Sparta, Corinth or Rhodes, many events in the Islands between Corfu (Kerkrya) and Zante(Zakynthos) have shaped the history of Europe. While we sail through this stunning area we take the same routes as many ancient mariners so sit back and have a read.

Legend states that the Ionian Sea is named after Io, the lover of Zeus who swam across the turquoise waters to reach the Zeus in Egypt. It is thought the Ionian was settled in the Bronze age with Corfu and Kefalonia being the main settlements. Kefalonia especially has quite a number of Mycenaean sites and in 1991 a tomb from roughly 1300BC was discovered near Poros hinting at a larger Bronze Age settlement in that area.

One very interesting area of research is the location of Odysseus’s palace from Homer’s epic poems the Iliad and the Odyssey. Legend states that Ithaca was the famous island home of the legendary leader but the island’s topography doesn’t match with the descriptions in the poem. The famous German Archaeologist Wilhelm Dorpfeld always thought the location of Odysseus’s Palace was in the bay of Nydri due to the following passage from the Odyssey.

“I dwell in shining Ithaca. There is a mountain there, high Neriton, covered in forests. Many islands lie around it, very close to each other, Doulichion, Same, and wooded Zacynthos— but low-lying Ithaca is farthest out to sea, towards the sunset, and the others are apart, towards the dawn and sun. It is rough, but it raises good men.” Homer, Odyssey 9.1:”

These islands could refer to Kalamos, Kastos, Meganisi and the smaller satellite islands around Nydri.

The Ionian Islands in Classical Greece & the Peloponnesian War

Following the Bronze Age collapse the next legend to come from the Ionian is the fate of the famous poet Sappho who is said to have committed suicide for the sake of love by jumping from Cape Lefkada.

It was thought the islands were colonised by the Corinthians from the 7th Century BC with different city states founded on each island. The Corinthians built a channel to separate Lefkas from the mainland and aid navigation through the Inland Sea and the first town on the island was built slightly south of the current capital. Another city of note is the ruins of Ancient Sami above the current town of the same name on the island of Kefalonia. Established after the Greek Dark Age it was a flourishing city in a strong mountain top position until it was taken by the Romans in 188BC. The ruins of the Ancient Acropolis sit above the town of Sami and are well worth a visit.

It was events on the island of Corfu which led to an end of the Classical Age of Ancient Greece. An argument between the the people of Corfu and the city of Corinth drew the Athenians into the dispute which resulted in the Battle of Sybota in 433BC. This acted as one of the catalysts for the Peloponnesian War with Sparta, Corinth (including the Ionian Islands) along with the rest of the Peloponnesian League being arrayed against the forces of the Delian League led by Athens. After many years of war the Peloponnesian League ended up Victorious but it left the Greek City states so weakened that the way was clear for the rise of Macedonia and Alexander the Great.

Roman Times & The Battle of Actium

The city states of Greece fell to the Romans in the 2nd Century BC and the Ionian Islands fell under their rule and it was during this time that one of the most important events in the history of the Roman Empire happened just to the North of Lefkada, near Preveza. Following the death of Julius Caesar in 44BC a series of wars broke out between Octavian Augustus, Mark Antony and Caesar’s killers representing the senate. Through numerous battles and alliances the war ended up finishing in the largest sea battle of the Ancient World with Augustus and his very able Admiral Agrippa beat Mark Antony and his ally Cleopatra to become the first emperor of Rome. Antony and Cleopatra committed suicide shortly after.

The islands remained under Byzantine rule after the end of the Roman empire before being caught up in the wars of powerful European families. Zante, Kefalonia and some of the smaller islands were conquered by the Normans in the 12th Century. Other French and Italian families became involved and built the beginnings of the Castle of Santa Maura which separates Lefkas from the mainland. The islands gradually fell under Venetian rule over the following centuries and were subject to many battles between the Venetians and the Ottomans. Corfu was never conquered by the Ottoman Empire whereas Lefkas spent the longest period under their rule which included building the castle we see today. Lefkas joined the rest of the islands in 1684 under the Venetians. The architecture of Corfu and Zante owes a lot to this period and both towns are wonderful places to get lost in amongst the colourful buildings.

With the fall of Venice to France during the Revolutionary Wars the islands became part of France for a while before being conquered by the Russians. They reverted back to French rule with the Treaty of Tilsit before the being captured by the British after a sea battle of Zante in 1809. The British turned the islands into the United States of the Ionian Islands and everyone took up Afternoon Tea, Cricket and other English Pastimes. When Greece became independent in the mid 19th Century the Ionian joined it in 1864. The first leader of Independent Greece, Ioannis Kapodistrias was born in Corfu.

During the Second World War the Ionian was occupied first by the Italians then the Germans after Italy surrendered in 1943. These events led to the terrible events of the portrayed in the book Captain Corelli’s Mandolin with 5000 Italian soldiers killed for resisting the Germans. The resistance movement was strong and active in the mountainous interiors and gained much support as the war went on.

Those interested in the history of this area should read Simon Scarrows “Hearts of Stone” which follows some Archeological Digs on Lefkas just before the Second World War and the events that followed. Another is of course Captain Corelli’s Mandolin by Louis de Bernieres mentioned above.

Please feel free to comment if you know of any other books about the Ionian Islands.